Kick the Chick was a project developed for GameSphere, a sidebranch of InfoSphere, who hired me to conceptualise a game for the iPhone. InfoSphere is a company that delivers technical solutions to improve complicated business processes and they wanted to create a new branch; GameSphere, dedicated to the development and marketing of mobile apps. This project was a 'proof of concept', to see if this was viable for them.

If possible we would make a working demo, but the main goal of the project was to show all the necessary steps to make a game from scratch to finished product, within 100 workdays.

The concept we came up with was a 2D puzzle game where you would strategically place and manipulate objects to achieve your goal. It was a game about a manly, macho rooster and he was just fed up with all the chattering of the chickens. They just go on and on about all kinds of things he didn't care for! So he came up with a plan to make them shut up; using the little, innocent, naive chicks. We called the project codename 'Shut Your Beak'.

The story was a little joke. The idea of the rooster and the chickens came from the Dutch term 'haantjesgedrag', which translates to 'macho behaviour' in English (literally 'little rooster behaviour'), and the stereotype of how women always cackle, in Dutch 'kakelen' (which is the sound chickens make). It was a humorous, cartoony game.

So how would he make the chickens shut their beak? The idea was he would poop in strategic places, making the chicks slip in it and (by manipulating various objects) land in the chickens' beaks, making it impossible to still speak.

I had worked up a quick Proof of Concept of the idea in Flash, to showcase how it would work:

(There is only one viable place to poop in this, in front of the ramp)

With this concept I had created the following images for the game design document; 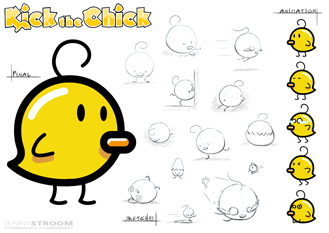 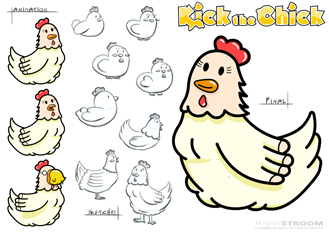 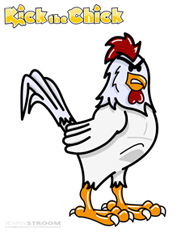 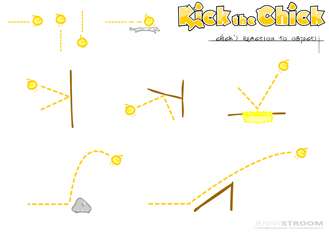 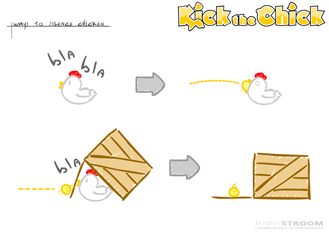 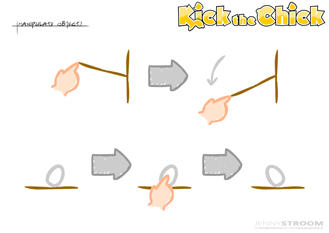 More people joined the project and an effort was made to create a working demo using Unity. I had created the following in-game assets for this; 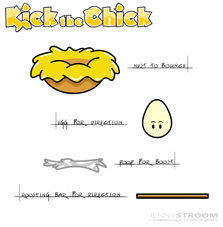 While working on the demo the concept started to drastically change. Our creative director wanted something more like Angry Birds, and wanted the Rooster to 'launch' the Chicks by kicking them. This is evident by the Rooster art in which he was given long legs to kick. In stead of tapping the Chick when done manipulating the objects, you now kicked them. This lead to the title 'Kick the Chick'.

At this point my work was done and left GameSphere. The creative director also wanted the speed and height in which the Rooster kicked to be variable, at which point the manipulation of objects puzzle component would no longer work. The game changed into a physics game using a flinging mechanic, where you would eliminate the Chickens by launching Chicks at their forts. He also started to change the art, re-drawing it himself in a 'Looney Tunes' style, and adding power ups. 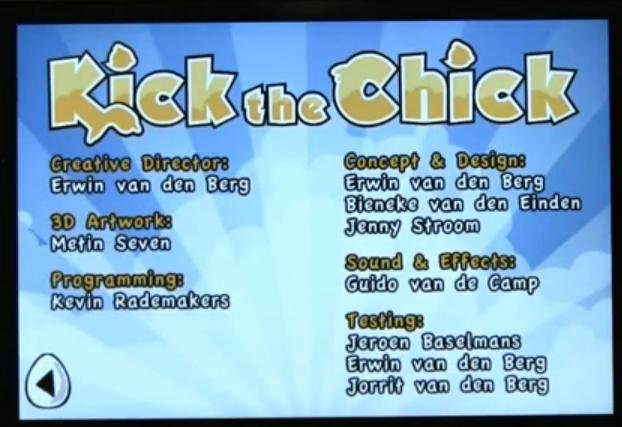 Kick the Chick is available for the iPhone here.